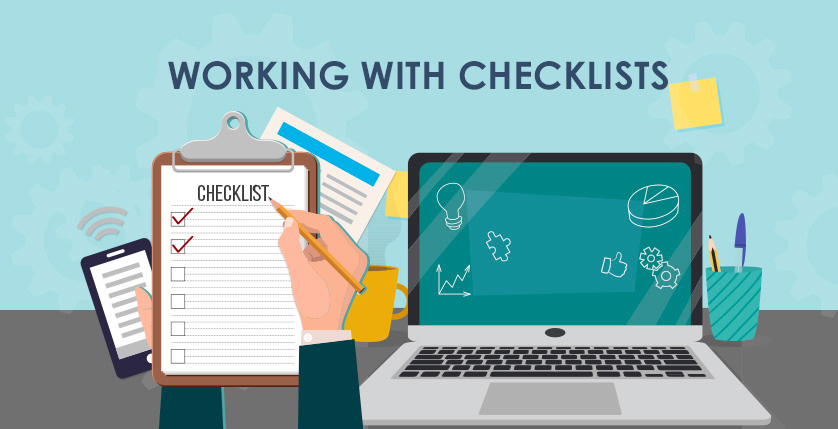 Checklist – is a list which contains a number of necessary checks during testing of the software product. By checking the items on the list, a team or one tester can learn about the current state of the work performed and about the quality of the product. By working on a project using a checklist, the probability of re-checking for the same cases is excluded, and the quality of testing increases, since the probability of leaving some functionality unattended is significantly reduced. Therefore, it is very important to know the composition of the checklist elements and be able to use it effectively. As a rule, checklists are made in a Google spreadsheet to provide general access to all QA specialists.

What do checklists consist of?

Сhecklists are very simple. All of them contain a list of blocks, sections, pages, other elements that should be tested, for example: 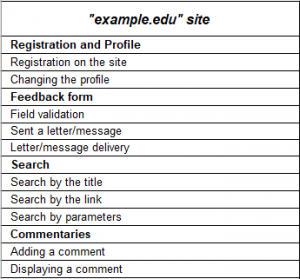 Items can contain both a linear structure and a tree structure, with or without sections/subsections. They should be as concise as possible and at the same time understandable for a tester who isn't familiar with the application yet. The points must be clear so that they can’t be understood in any other way. All of the  items must be in one language: Russian or English. As a rule, each checklist has several columns. Each column is for testing on a separate platform. The device name, browser, and version should be indicated as well.

Several people could test the application at the same time. In this case, each tester takes one or two platforms and tests only on them. In this case, the tester who performs the specified amount of work should be indicated in front of each platform.

Passing the checklists, the tester marks the status in front of each tested item. The following status options are possible: For better clarity, as a rule, each of the statuses has its own color.

After testing is complete, there should be no cells marked as «Not run». All check-list bug reports should be added to the notes to the cell with the «Failed» status.

It is acceptable to add notes to some cells with different statuses, if necessary. Status notes with links to bug reports  are also required for cells with the «Blocked» . However, as a rule, the note in the cell with the «Blocked» status refers to a previously created bug report, which in one of the previous tests has already been marked as «Failed». In other words: an item once marked as «Failed» can be a blocker for several or all of the following items on the checklist. Let's take a look at this example:

Here we can see that there are 2 different bugs. Let’s say that the first one is for the Chrome browser – some function doesn’t work as intended. In this case we create a bug report and mark the current test as «Failed». All other tests will be marked as «Blocked», since it will be impossible to check them.  It is the same with the Firefox browser. The email letter can’t be sent and a bug report is created on this, so, all the tests related to email sending are marked as «Blocked» with a link to the same bug report.  Note, that a few main points that should be taken into account when working with checklists:

To create an effective checklist, we will formulate several rules. Checklist points are unambiguous atomic and complete operations.. For example, adding an item to the shopping cart on a site and paying for the order are two different tasks. These operations should be arranged in separate points: the product is added to the cart, the payment is sent. The purpose of the checklist is to take into account all actions for the most complete coverage with software tests, therefore, while creating checks, you should keep the unified form.  For the convenience of passing the checklist, it will be good to compose tests in a form that will be consistent based on the logic of using the functionality. Within the «Registration and Profile» sections: registration on site,  profile editing. The «Feedback» section: fields validation, email sending, email delivery.

Benefits of using the checklist: Checklists usage – one of the methods of increasing the bus factor. In the field of software development the bus factor of the project - is the measure of information  concentration among individual project members.  Good checklist – is a document, describing what should be tested. In this case, the checklist can be of completely different levels of detail. How detailed the checklist will be depends on the reporting requirements, the level of knowledge of the product by employees and the complexity of the product. The checklist is intended for: The checklist contains: