Peculiarities of game testing on PC

Peculiarities of game testing on PC 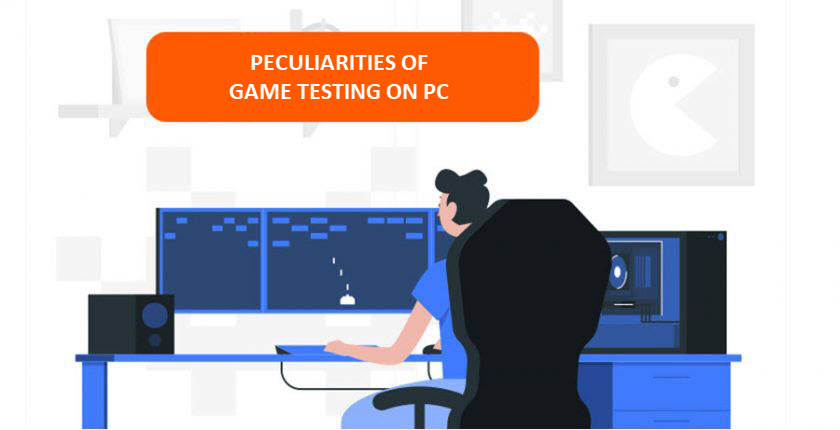 In game testing there are special terms and notions that are worth paying attention to before reading the article.

Multitouch – a function of sensory input systems that performs simultaneous determination of the coordinates of two or more points of contact.

Crash – a sudden, unexpected termination of the game caused by a software code error(s) occurring spontaneously or as a result of certain user actions. It is often characterized by data loss or corruption.

Gamepad – a type of game manipulator. It is a remote control that is held by two hands. Thumbs are used for control.

Experience points – in computer, mobile, console and other games – a reward, expressed in numerical form, received by the player for the successful performance of certain actions, often the destruction of enemies. Accumulating experience points upon reaching a certain threshold leads to levelling up.

Peculiarities of the game testing on PC

First of all, it should be understood that PC testing differs from mobile testing in that the user has a keyboard and mouse. It is presupposed that there is no need to wait for a multi-wheel drive here. Yes, it is possible to use a touch monitor, but there is only one mouse cursor on the screen.

Also, do not forget that various interruptions in the form of an alarm clock, call, SMS or notification will differ from mobile testing. If during mobile testing the game may crash or not save progress, then on PC such problems are unlikely, given that the above interruptions are possible only in the presence of certain applications (Skype, Discord). This is due to the fact that the architecture of the PC system is different from the mobile system.

Build extensions on PC will also differ from the mobile platform. For Android it is .apk and .aab, and for iOS it is .ipa.

PC graphics settings can be quite detailed. This means that you can adjust the graphics both in general for the entire application and individually for certain elements, such as the display of shadows, textures, reflections, etc. On mobile devices, graphics settings are present in a small number of games.

At first it is needed to decide the game requirements for the system because according to those, the average or high performance of the PC is needed.

Most games support a gamepad, however its presence is not always mandatory, but checking control using it takes place in testing. It can be both a steering wheel for games of the racing genre or a joystick with a handle for flight simulators, and a gamepad of the usual form.

In some cases, a virtual reality helmet will be required for testing. It is required for games that support it or are controlled only with the help of a helmet and its gamepads.

Co-operative and multiplayer games have a built-in voice chat function that can be checked using the microphone.

Things to pay attention to while game testing on PC

The types of game testing on the PC platform are almost no different from the mobile, except for the differences of the platforms themselves, listed above. But we can single out a few more tested characteristics. Let's briefly consider them.

The next thing that can be highlighted is the clarity of the rules. This can be verified by measuring the time it took to complete the first levels and use help (hints) compared to the benchmark. If the game is too difficult in the first stages, then a large part of users may abandon it.

You should also not forget about the integral part in games – sound and music. Music and sound must be reproduced without distortion and be of high quality. If the music or sound is of low quality, then in most cases users will not play for a long time, or will turn them off.

Every game involves saving some sort of progress. The lack of saves may be dictated by the game itself, but there should always be minimal progress, such as total points. If the game has saves, then when checking them, you need to pay attention to everything that is saved and loaded. If the user had a certain amount of experience points, was in a certain place, had certain items, then when loading this save, everything should remain unchanged for him.

The texture in the game cannot be classified as good or bad. The main thing in checking the texture will be its presence on visible objects, correct display and its uniformity (if the game has high-expansion textures, then there should be no low-quality textures).

The competitive type of game involves wanting to play the game better than others. It is not present in all games and can be either in the form of a regular table with points for a level/challenge, or in the form of full interaction with other players during the game.

Each game has its own mechanics, and even if the game's mechanics resemble mechanics from another game, you shouldn't jump to conclusions. Mechanics can differ significantly, so you should check it according to its features.

Assassin’s Creed Unity – on the Internet, the images of the characters of the game, in which the textures of the character were not loaded, became especially popular. The screensavers showed the characters' teeth just flying in the air, their eyes and hairstyles, which looked both funny and quite terrifying at the same time.

One of the most famous bugs in The Sims 4 is the one related to mutant children. This game also has many bugs related to the texture of the characters themselves, where their faces disappear or shift, but this bug is considered the most common.

The first part of The Witcher also has some visual problems with the display of the main character's face. Problems with other parts of the body were also noticed.

As mentioned, game testing basically uses the same methods as all software. However, testing the user's interest in the game and the quality of the game are specific. Unlike traditional software for solving business problems, the primary importance is the interest in the game, in particular the first impression of the game program. After all, when immersed in the game, the user will return to it more and more often, which will also attract a large audience of users with positive reviews.