How can attachments help to fix the bug?

HOMEBlogCourse materialsHow can attachments help to fix the bug?

How can attachments help to fix the bug? 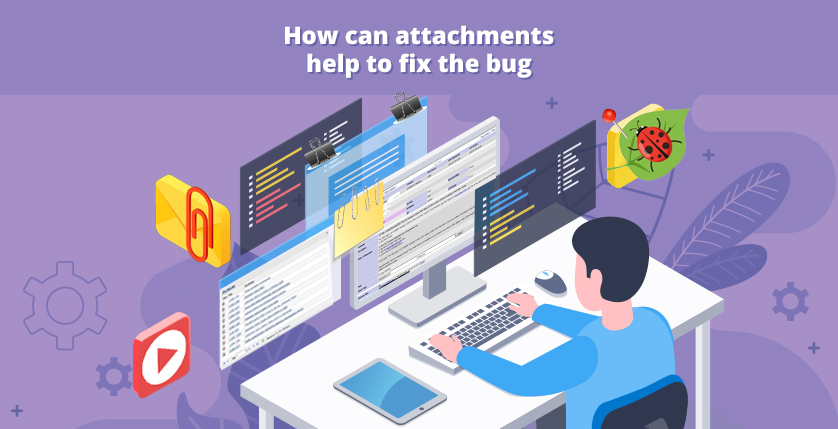 The tester has a tough task to explain the bug to the developer in the easy-to-understand way. What can possibly help to understand the problem better than the depiction of it? That is why attachments are one of the crucial elements of the bug report, all the information collected must be added to it.

There are the following types of attachments:

Screenshot is a digital image of the screen, which was obtained  with the help of built-in functions of the OS or other specialized program after the user`s command.

Attached screenshots should be in popular extensions, such as: «.png», «.bmp», «.jpeg». These formats allow you to watch a screenshot without installation of extra applications . Meanwhile «.gif» files are needed to be excluded from the list of useful extensions as  the  attachment  of this format can’t be rewinded to the needed part or paused. In the Mantis bug tracker all the screenshots are  better to be  attached straight to the report in the «Upload files» section. This way it is more comfortable to look through  the screenshot right in the report without moving through the links and preliminary download which reduces time for reading and working with bug reports.

Video file is a video record, collected with the help of a program for screen recording.

Video is needed to attach in the format «.avi», «.mkv». These formats are compatible with most media players and also available in Mantis bug tracker. Video that confirms the issue may be uploaded in the «Upload files» block  but attention should be paid to the limit of the uploaded files size  up to 5,000 KB.

Log-file is a text file with the work records of  the server or PC .

In case if the app is being tested and the  bug can’t be displayed on the screenshot or video (due to the crash), then all actions of the application should be recorded in the logs. Log-files contain all needed information for restoring the all events flow.

It happens that developers can skip reading a description and steps, but only if the demonstration screenshot or video is attached. So, it’s needed to understand when it will be appropriate to add a screenshot and when it should be a video.

In general,the visual bugs are described (UI, layout) through screenshots. Attached files should be informative, in case of a bug with the cursor, it should be displayed on the screenshot. Sometimes it seems that everything is clear without the screenshot  but bugs are not always fixed immediately. After some time the interface can change and without a screenshot it won’t be obvious where the issue was. Picture will help to see what the interface was like before to compare with the present one.

Everything that can’t be displayed on one or several screenshots is better to be  recorded on the  video. A defect is often needed to be displayed in dynamics because it is being  reproduced in the process of some actions or after certain actions. In this case it will be better to attach a short video because with the help of it the unusual behaviour of the app, site or game can be successfully demonstrated.

Sometimes it takes a long time  to watch the screenshot attentively to understand what the bug is . In case if the  interface is complex, the screenshot needs to be improved. To make the image informative and readable, the tester should follow  next rules:

Here are some examples made by following the requirements above.

It will be hard to make an informative attachment without built-in graphical editors. Screenshots with hand-painted arrows and squares mainly look unprofessional and messy.

Let’s see what programs can be used to make a good screenshot or a video.

Snagit is one of the most popular programs for capturing the screenshots/videos. It has various features set  to  work with images. It is compatible with all OS’.

Jing allows users to take  a screen selected area screenshot simply and immediately post it on the Flickr or ScreenCast services. Main con is that the video can be recorded only  in the «.swf» format.

LightShot takes  screenshots quickly and saves them in the «.png», «.bmp» or «.jpeg» formats. One of the advantages is the user can upload any screenshot to the server.

Bandicam is a program that  allows the user to record a high quality video in the «.avi», «.mp4» formats. It also records 2D and 3D games.

Monosnap has a simple and clear interface. It can save created screenshots on its own cloud storage.

Attachment is an inherent part of the good bug report. It allows the developer to reproduce the bug faster. That’s why it’s necessarily to capture the screenshots or videos right in the report creating process. It's very easy and quick to do with the help of the popular programs.